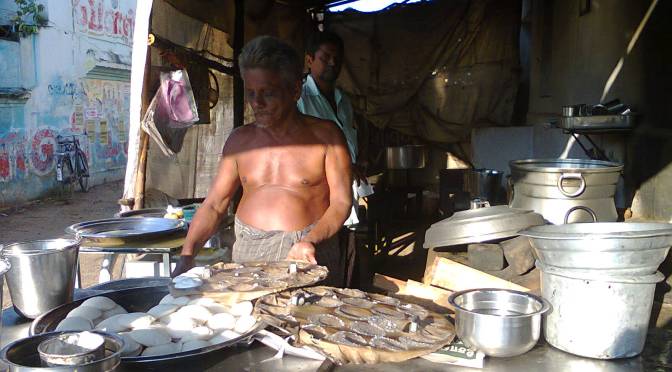 The last time I wrote one of these I was in Kumbakonam, an inauspicious little place in eastern Tamil Nadu. After another load of faffin’ about trying to get my train ticket ratified, the station manager told me he couldn’t help me in my quest & I had to do it at Trichy station. So, I set off early the next morning (the 23rd), catching a bus to Trichirapalli, or Trichy for short. It seem’d a shame to rush there… I had over 12 hours to go until the (possible) train to Ramashwaram, & on seeing a very impressive temple as we pass’d through Thanjavur, a quite sizeable city, I impulsively jumped off to get a better look. It was a big sandstone affair, the walled cornerstone of the old medieval city that was the capital of the great Chola empire.

I spent a couple of hours in Thanjavur, dawdling along with my rucksack, especially enjoying the Sawaswati Mahal library in the royal compound. It had many fine manuscripts & images of India, including a 500-year-old miniature comic-step style rendition of the Ramayana. A magnifying glass was provided to examine the fine detail & it indeed was amazingly fine. Also on display was a wicked palanquin – a kind of rickshaw without wheels that lower caste Indians carried Rajput princes & British Colonels wives in – plus some palm leaf manuscripts. Imagine a long, rush-type leaf… well this is what south Indians once used as paper, with books & legal edicts being scrawled left to right along the long length of the leaf. It was in this form that the kural of Thiruvallavar was first cast.

On reaching Trichy, the biggest city I’d seen since Mumbai, complete with western-style high street, I yet again tried to get my ticket confirmed… only to be told to come back two hours later. Two hours later, however, to a big WHOOPEEE! from me that froze the ticket office in its tracks, I was confirmed to go that night. Leaving my stuff in the railway’s left locker, I hit the city, made special by the ‘Rock Fort’ that juts above the rooves on the now familiar red volcanic stone. The view from the top was stunning, especially as I’d timed it just right for sunset. I was stood in the middle of a plain, with not another hill or height in sight. On one side lay the Carvery river; dark narrow channels ribboning through great swathes of sand. On the other lay the city of Trichy, whose pastel houses & rooves gave me the impression I was back in Rajasthan, at Jaipur or Jodhpur.

Night fell & a few hours of pottering later I was in my sleeper carriage trundling south to Ramasharwam. I reached there before dawn (05.15), the station’s foyer thick with sleeping families. Then began an increasingly desperate two hour tour of every hotel & lodge on the island. I felt a bit like Joseph & Mary in Bethlehem on Xmas Eve as I was refused on every occasion – the whole place was full & would be for the forseeable future. Apparently half of Gujurat (a state in northern India) were here for their religious holidays, rather like when Burnley invaded Blackpool in the Wakes Weeks of yore. The beach was packed with acolytes – even at 7.30 AM – the ‘promenade’ full of coaches & young lads whooping with delight as they splashed in the sea. Thus, it was time to go, putting my plans of writing a wee sonnet sequence on the Ramayana right out of joint. This is what brought me here, promises of legends & the view across the stringed-out island chain to Sri Lanka, cross’d by the Monkey King Haruman on his way to battle the demon-king Ravana. For now, I was forced to settle for a bus ride back north, sweeping me over a sunlit, 2k long bridge, rising high over a fisherboat-infested sea.

Sixty k to the north lay Ramanathapuram – my intention was to stay there & take day trips to Ramashwaram – the same idea that the other half of Gujurat had had, who’d booked up every room months in advance & used the fleet of buses that I’d seen by Ramashwaram beach to take them there. ‘Fer fucks sake,’ I thought, & after a quick breakfast jumped on yet another bus to Madurai, 114 k to the north – & it was still only 8AM. On the way, I reflected awhile & realised it was an appropriate place to complete the Kural. I was coming full circle, for it was on a quiet lane in a bookshop there that I found the poem in January 2002. I’d first dipped into it on opium & was blown away by its beauty & depth of wisdom. I’d thought then it would be great to translate the lot, but at the time it was beyond my abilities. Now, seven years later, I’d matured enough to handle it, beginning work on the last fifty or so kural as soon as I hit the city bus stand, Xmas Eve morning

After a mosquito infested Xmas Eve night (20 bites) I booked into a wicked, proper hotel – the best so far – as a little gift to myself. Christmas Day was spent finishing off the Kural, the first few of them in the amazing temple here. I’d found a wee shrine away from the thousands of Indians & Westerners that were channeling about the excellently carve dragontopped pillars that supported this vast place. I went to work in my own quiet little nook & cranny, to the babble of human voices & jazz-like sax-strains of an Indian trumpet. By me were six 2-foot tall black statues of gods, each sporting a ‘skirt’ & a garland of yellow flowers. On one wall was a giant painting of the green-skinned Vishnu, & above me a series of portraits of famous Tamil saints. It was a lovely wee moment, filling me with a twist of spiritual ecstasy (I haven’t had a proper pill in months) as I walked outside into the skintingling sunshine. I’m not religious, like, but the fact I was finishing the divine Tamil text, in one of the holiest Hindu temples, on the most sacred day in Christendom, was not lost on me. The Karma of the Kural indeed.

On the way back to my hotel, I found the wee bookshop where I originally found the poem, excitedly babbling out my story to the surprised guys there. Then, after a wee kip at my hotel, I went to the rooftop terrace & plunged into the last kural. The evening was lovely, warm yet crisp, up high on the 7th floor. Madurai revolved all around me & as the street sounds rose insatiably my pen scribbled frantically. As I finally finished off my task, the deep red sun was setting between two hills to the west, where Kodaikanal presumably lies, my next port of call. MERRY CHRISTMAS!!